The Roundhouse Kick is a crucial component of your ninjutsu training online. It is also called in some systems a Mawashi Geri or in others Kaze Geri or Wind Kick, and is a powerful kicking technique designed to cause systemic damage.

DISCTINCTIVENESS OF THE NINJUTSU KICKING TECHNIQUE

Please note that unlike in many other disciplines, Ninja kicking is designed to always cause systemic or organic damage. This means that all kicks used by the ninja, including roundhouse kicks like the Kaze-Mawashi Geri, tend to drive INTO the opponents body, rather than coming in from the side, in order to direct all the energy of the kick to damaging a particular organ. Also, you must fold the leg at some point to add to the kick the power of the muscles of the thigh.

Like the kicking technique just described, ninja techniques can often differ from those of other martial arts, so when you are doing ninjutsu training online, you need to pay especial attention to these details. 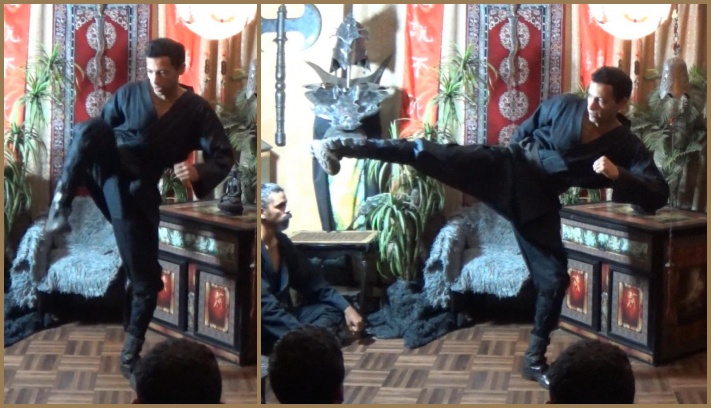 The roundhouse kick can temporarily disable an opponent if applied to the area of the intestines, in which case it causes serious discomfort.

THE KAZE-MAWASHI GERI FOR SERIOUS DAMAGE

The roundhouse kick can cause serious damage if it is applied to the spleen, liver or bladder, in which case it can cause death through internal bleeding or through widespread systemic infection.

...READINGS FROM THE SCROLLS...
Using Attacks with Lethal Effect in Combat “Enough,” the master said, “You practice well. But understand, my students, that the outer line attack is not the best one to use. It is powerful, yet slow. Most important of all, it does little or no damage to the organs.”

The students stopped their training and formed up before him to listen.

“My students,” the master intoned, “For lethal damage to your enemy, the penetrating attack to internal organs is best. You may adapt this one principle to any attack you use. You may use it with a Shotei, or a Seiken. But it is most effective with the geriwaza, with the kicks, for these are most powerful. The direct-line, penetrating kick to the internal organs causes the most damage, is fastest, and hardest to stop. This is what you must use in combat. Adapt even your roundhouse movements to this principle.”

'The deceptive cooling breeze
Has within it the potential of the giant storm,
That carries all before its force;'

'So also, who strikes with the spirit resolved,
Whose force strikes through any obstacle -
As does the storm's -
Will carry all before himself.'”