THE HISTORY OF THE GYOKKU NINJA

THE MILLENNIA-LONG EVOLUTION OF THE WISDOMS

The knowledge and wisdoms that are the basis of the Way of the Ninja are ancient indeed, originating, millennia before, not in Japan, but amidst the mystical, shadow-misted mountains of ancient Tibet, and in India.

Here the Way was a way of universal harmony, a means of existing in accord with all that is. Seers and teachers sought - and gained - true knowledge and understanding. They looked to the stars and understood their workings; they measured the earth; they pondered the mysteries of time and matter. And they peered into the vastness of the human soul. This was indeed the great age of the Way, culminating in a consummate merging of logic, science and philosophy.

Even the austere cruelty of the Himalayas was no barrier to such cosmic insights, and the teachings soon crossed that array of giants of merciless stone.

Thus, in a distant past, known by names now forgotten, carried by long-dead masters and seekers, the teachings of the Way traveled north, through freezing and almost impassable mountain passes, and into China.

And there, for a time, the wisdoms remained.

It was only during the reign of the Tang Dynasty in China that the teachings that would become the basis of the Way of the Ninja entered Japan.

Some of these teachings were first brought into Japan by scholars such as the legendary monk Kukai, who traveled to China to study under Hui-Kyo, returning to Japan in the year 806 (western tradition) steeped in learning under many masters, with books in the Sanskrit Siddham script; an accepted master and heir of the teachings of Hui-Kyo.

An even more diverse influx of knowledge occurred with the eventual fall of the Tang in China in the year 900, for many warriors and scholars entered Japan then, fleeing the chaos in China, bringing with them innumerable insights and as many philosophical and warrior traditions.

THE MYSTICAL ROOTS OF THE WISDOMS

Originating in these teachings from China, Shugenja and Yamabushi mystics arose in the mountains of Japan, followers of the subtle Mikkyo tradition introduced by Kukai, and his fellow seeker, Saicho. Honing their bodies and minds by long journeys through the mountains and tests of great fortitude and endurance, the Yamabushi created a discipline quite as demanding as that of the original creators of the wisdoms, a ritual spiritual discipline based on courage and endurance that was truly admirable.

In the mountains of Japan, the Mikkyo traditions were merged with more ancient teachings of logic from China and India to create a very different way of perceiving reality, a truly arcane system of thought and action.

As the years passed, Taoist practitioners of the esoteric Kuji Kiri arrived from China and met with the mountain practitioners of the new systems of thought. From these Taoist sages the mountain-mystics learned the Kuji Kiri, the mystical hand-signs that break the arms of Maya, allowing one a bond with the cosmos beyond the mind and senses of humanity. With the addition of the Kuji Kiri the art truly began to evolve.

Indeed, many of the writings of the Clan are in ancient Chinese, not Japanese, and there are even some extremely ancient texts in the Sanskrit Siddham script.

A MERGING WITH THE WAYS OF WAR

Years passed. The mystical Mikkyo and Taoist practitioners were joined by dishonored samurai, and peasants seeking refuge in the mountains from their overlords. Many of these became the disciples of the mystical teachers, bringing to their teachings the first touch of the warrior arts. Soon the mountain refuges became a harbor for clans of warrior-mystics, whose ways would one day be known as the Way of the Ninja.

Here were the true origins of Ninjutsu as a warrior art, as physical methods of training were increasingly adopted and merged into the art. Warriors escaping the fall of the Tang in China added to this their own knowledge of combat technique, strategy and weaponry. Knowledge was exchanged, amassed and refined, until the mountain-refuges became one of the finest training grounds for warrior-philosophers in the history of humanity.

Nevertheless, as you may have noticed, the Way now had a distinctly martial aspect to it that had been lacking before. 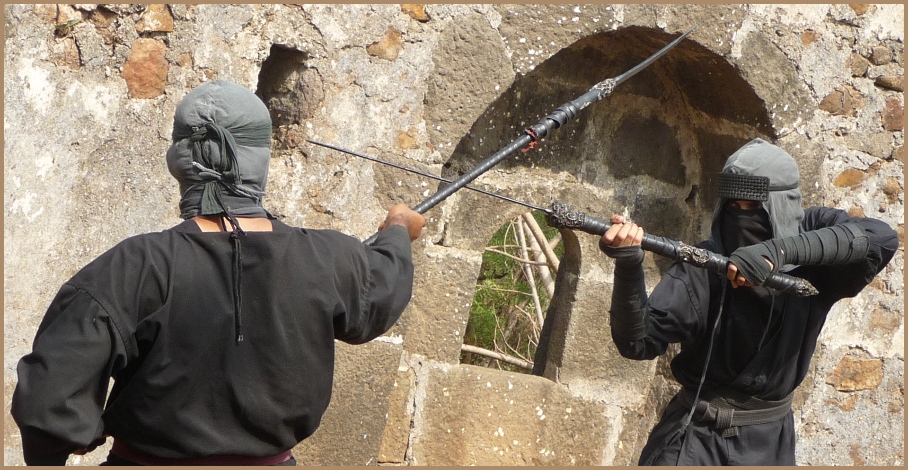 From a tradition of learning and philosophy, the Way had evolved - some might even say, had been corrupted - into a system of mystical warrior technique. Yet the mystical warrior methods had their uses - they ensured survival in a sometimes harsh world, and also granted to a practitioner invincible good health and immense longevity.

RISE OF THE GYOKKU TRADITION

Here arose the Gyokku tradition of combat, known as the 'Tradition of the Jeweled Tiger'. To the left, you can see the characters for 'Gyokku', upon an antique lamp of the dojo. To the right, is the old 'Jeweled Tiger' clan seal, forged in bronze. It is set upon a horned banner, though you cannot see this in the picture.

Combined with this were techniques of stealth, and a considerable knowledge of plant and animal based nerve poisons; as well as complex methods of thought and strategy, these often applied as alternatives to battle.

Indeed, the Gyokku ninja expanded the ancient teachings of universal harmony further, into consummate methods for the deflection of martial aggression to its own destruction. The sophistication of the methods of these warrior-mystics became evident when samurai lords sought to make inroads into their domains.

The ninja – for such they now were, though the more traditional term is ‘shinobi’ – countered the aggression of the samurai with a shadowy counter-war that proved their worth even to their aggressors, who would themselves patronize and make use of the abilities of the shinobi in centuries to come. 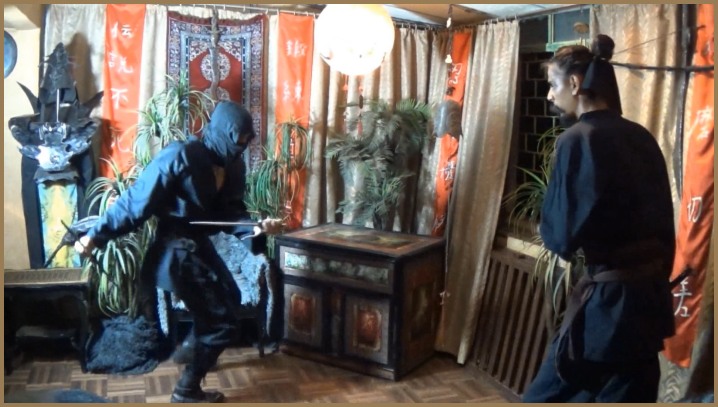 ETHOS OF THE NINJA

The ninja were formidable in battle, yet they were even more adept at psychological warfare, creating legends of their exploits that made them seem more than human in the eyes of potential opponents.

In reality, the ninja merely used weaponry, strategies (and perhaps even poisons) that originated in China, or that they innovated themselves. In other words, the ninja used combat methods, tactics and weaponry that their opponents were unfamiliar with, giving them a considerable advantage over less adaptable foes.

The ninja – or shinobi – were never superhuman; but they were always skilled chemists, innovators and weapon-smiths, and they were skilled at using their superior knowledge to create legends. LEGACY OF THE NINJA

For centuries the Way of the Ninja survived thus, sometimes powerful, yet more often slowly dwindling over the centuries; but still, nevertheless, entering the folklore and legends of the Japanese people.

Then finally, with the Meiji Restoration, as Japan modernized, the feudal politics that had supported ninja traditions vanished, and it seemed that the sun of the Ninja was set.

Then came the bitter years of the Second World War, when continents burned, and many - too many - of our ninja died in savage combat in the terrible jungles of South Asia, as Ittohei of the Emperor. Yet those who returned from the war were battle-hardened veterans like Noguchi Kawabata, each of whom had killed perhaps 30 or 40 enemy operatives in combat.

Under the leadership of such brilliantly effective warriors, the Clan modernized. 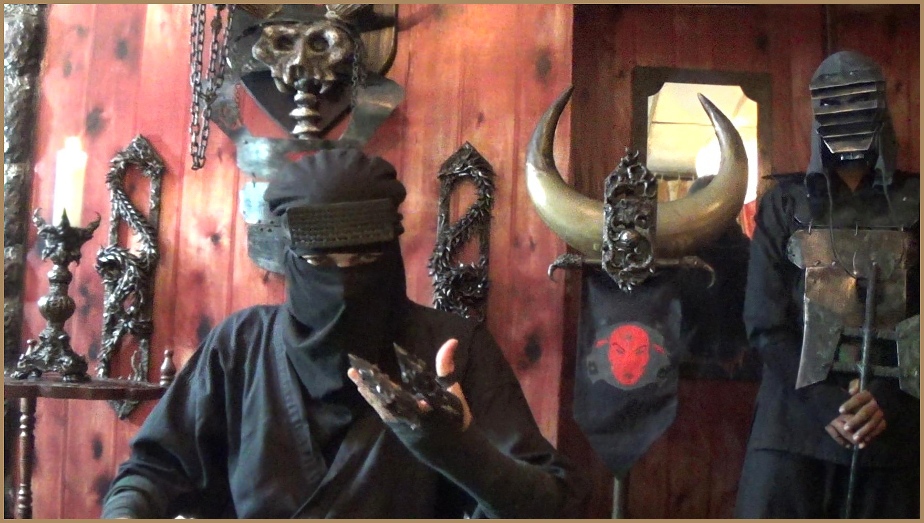 After WWII, the Gyokku Ninja Clan was not an archaic martial tradition - after WWII, we were an iron-willed organization of combat veterans using state-of-the-art weaponry, equipment and tactics.

Today, advanced ninja study subjects like electronic counter-surveillance and jungle survival, entering a South Asian jungle armed only with knife and fire-maker, crossing miles of hostile terrain, forging within themselves the will that enables the Clan as a whole to survive. 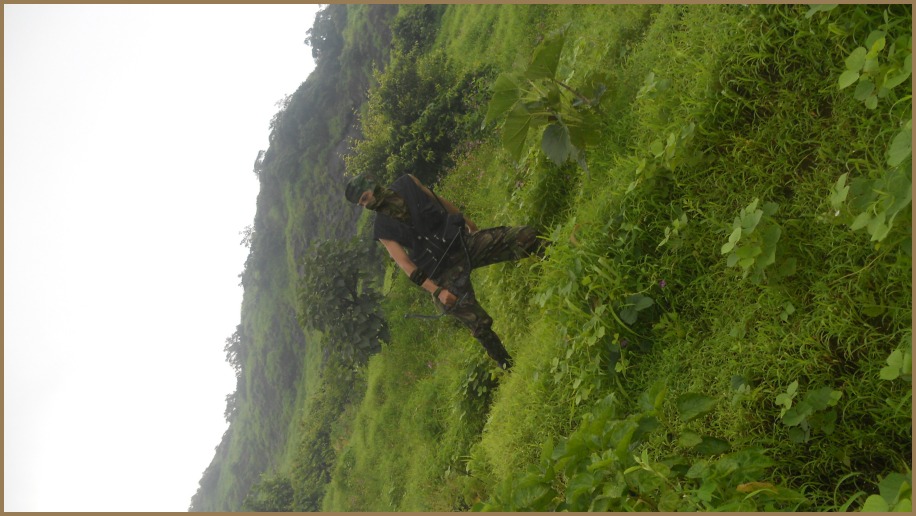 Ninja genin train at sensing the best path to victory from among many possible timelines, at extremely heightened levels of awareness, and at survival in many different types of environments. They also train at a wide variety of ultramodern weaponry. Advanced levels of training are available to selected - and highly loyal - genin.

There is a hierarchy of dojo - students from outside the Clan are accepted at many of the dojo dispersed over Asia, while the dojo in Tibet is reserved for more advanced students, and only Master level and above convene in the dojo in Japan.

And the river of knowledge that began in those ancient mountains of Asia so long ago continues to flow on its way down from the lands of Eternal Snow... 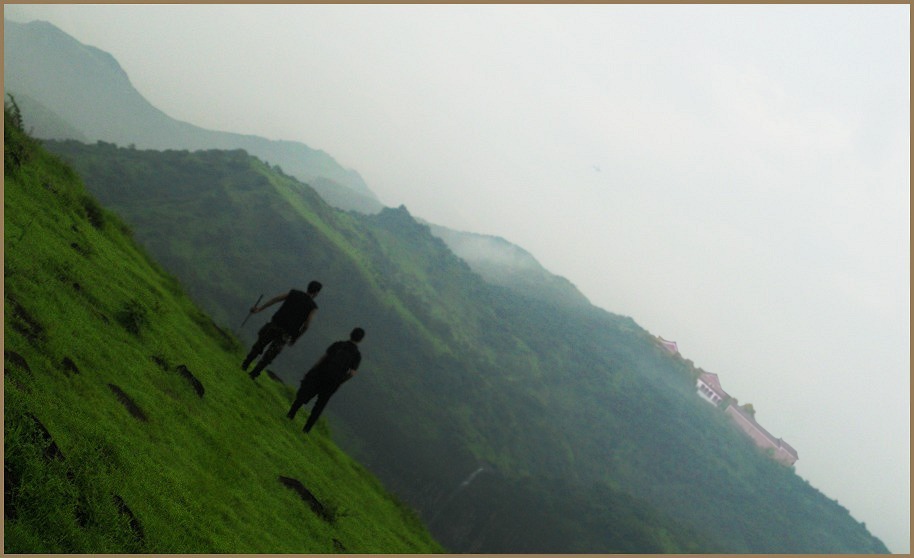 ...READ ON, TO KNOW HOW THE CLAN BENEFITS THE WORLD IN EACH OF THESE AREAS...

LAW AND ORDER AND COUNTER-TERRORISM

GLOBAL MILITARY AND POLICE OPERATIONS OF THE GYOKKU NINJA CLAN

The Gyokku Ninja Clan have trained the Presidential Bodyguards of some nations.

The Gyokku Ninja Clan are engaged in training members of Special Forces and elite Counter-Terrorist units.

The Clan is engaged in re-designing the Police Training Programs for nations like South Africa.

Military or Police personnel wishing to Train
individually with the Gyokku Ninja may contact the Masters HERE.

The Gyokku Ninja Clan runs a CERTIFIED MASTERS' TRAINING PROGRAM, besides the training offered in dojo in Asia. Gyokku Masters not only train students globally, but also advise upon diet, regarding personal, psychological and financial problems, and much more.

Those who become certified Masters can not only open their own dojo, but also access highly secret Gyokku Ninja Dojo in Tibet and Japan that are only open to Gyokku Masters.

THE PROTECTION OF CHILDREN

THE CLAN PROTECTS THE INNOCENT

The Gyokku Ninja Clan officially interves when children are threatened across the globe - for example, in cases of bullying in schools in many nations. In many cases, the Clan's intervention - via diplomatic channels - has changed the very atmosphere of a school, and massively reduced instances of bullying.

THE GYOKKU NINJA CLAN DOES ALL THIS AND MORE

...DO NOT HESITATE TO CONTACT THE MASTERS WITH QUESTIONS YOU MAY HAVE REGARDING TRAINING, PHILOSOPHY, MEDITATION, OR REGARDING PROBLEMS IN LIFE.

If the Ninja interest you, you may continue to explore the lifestyle and Way of the Gyokku Ninja Clan here... 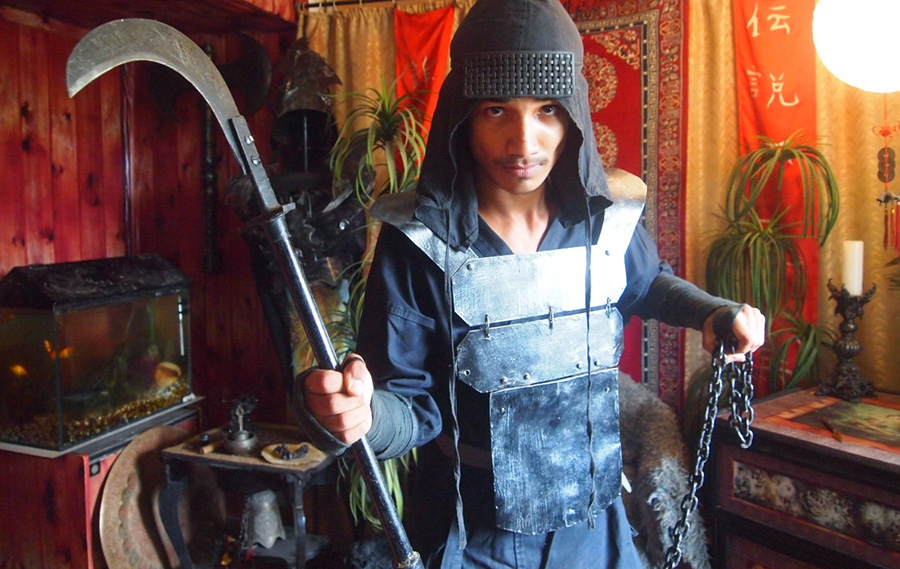