NINJA TRAINING TUTORIALS
...Hiza Geri or Knee Kick Attacks to the Groin and Back...

There are two variations of the Knee Kicks, or Hiza Geri – one is delivered to the front of the opponent, and one, from behind, to his back. The knee kick is a reasonable strike in close quarters combat. We will be discussing BOTH variations (with two separate videos) on this page.

...ADDITIONAL, DETAILED TRAINING IN USING THE KNEE STRIKE IN COMBAT...

The knee kick is usually used in close quarters combat. If applied well, this can be a reasonably powerful move. Knee and elbow strikes can generate a great deal of power.

EXECUTING THE KNEE KICK TO GROIN 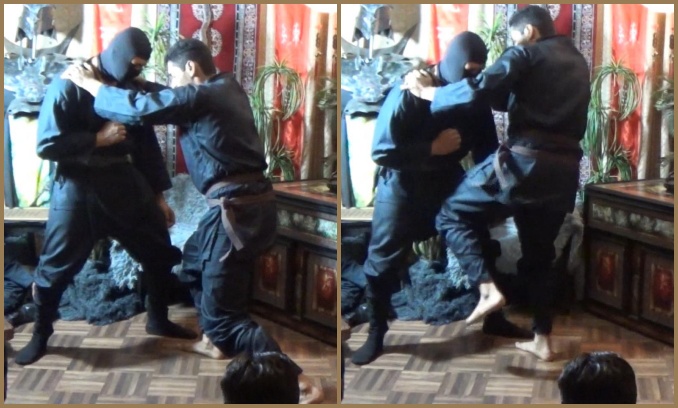 FACTORS TO BEWARE OF

Veteran warriors can sometimes take a knee kick to the groin from a beginner or intermediate level fighter, and continue fighting, so beware of this as well.

If you give a forward thrusting motion to the knee kick, it can be used to attack the bladder, which is just at the belt line in the front of the body. Only attack this target if you can generate enough power in a frontal thrust with the knee, and if the angles and situation of combat are right for you to do so.

An attack to the bladder can cause intense pain, and can certainly put your opponent on the ground. If the attack is made with extreme power the bladder will burst, leading to death from extreme and widespread infection of the internal organs. Death is inevitable unless the subject is taken into surgery within fifteen minutes after the attack.

Of course, there are many simpler and more convenient attacks that can be used against the bladder, so bear that in mind. In combat, a ninja uses the easiest, most convenient, and most effective attack from his repertoire.

A CRUCIAL POINT TO REMEMBER

...TRAINING CONTINUES AFTER THE NAVIGATION LINKS BELOW...

ADDITIONAL TRAINING - A VARIATION OF THE KNEE STRIKE.. TO THE OPPONENT'S BACK

...ONE CAN USE THE KNEE KICK TO ATTACK THE OPPONENT'S BACK - THIS VIDEO WILL SHOW YOU HOW TO DO SO...

You can use a knee strike from behind an opponent as well. Of course, this position of attack is relatively rare in combat, but can happen. One can also turn an opponent around when he is stunned, to use the knee kick to his back. Bear in mind what I said in the earlier training section about using the easiest and least time consuming movements in combat. The knee to the back requires the driving force of the hip – you must actually drive the knee INTO the back, in a thrusting, invasive movement. 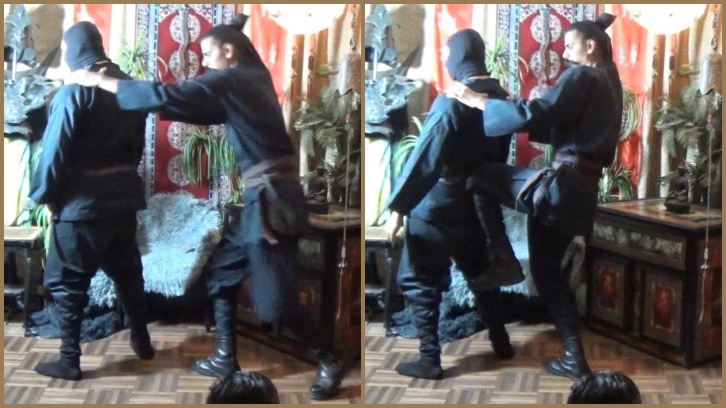 TARGETS FOR THE REAR KNEE STRIKE

NEXT PAGE: DISABLING ROUNDHOUSE KICK TO THE KNEE >>

...Have you read the previous page?...
<< KIN GERI FLIP KICKS TO THE GROIN

...Use the Links below to Access all the Training on the Site.. .
GYOKKU NINJA TRAINING TUTORIALS >> BASIC COMBAT ATTACKS >> HIZA GERI KNEE STRIKES