NINJA TRAINING TUTORIALS
...The Kin Geri or Snap Kick to the Groin...

The Kin Geri is a simple rising snap kick that is usually applied to the groin. It is a very fast move, and is effective against most opponents if it strikes home.

...TRAINING IN USING THE KIN GERI IN COMBAT...

The target of the snap kick or Kin Geri, is the groin. To execute this kick, one brings the knee up and then whips the lower leg out to strike the opponent’s groin. One strikes with the instep (Haisoku Kin geri) if one is barefoot or wearing soft footwear, and with the ball of the foot (Chusoku Kin geri) if one is wearing harder and more durable footwear.

In the end, to a ninja, it does not matter. Use what FEELS right to you. Use what is easiest for you to use. Destroy your foe. That is all that matters. 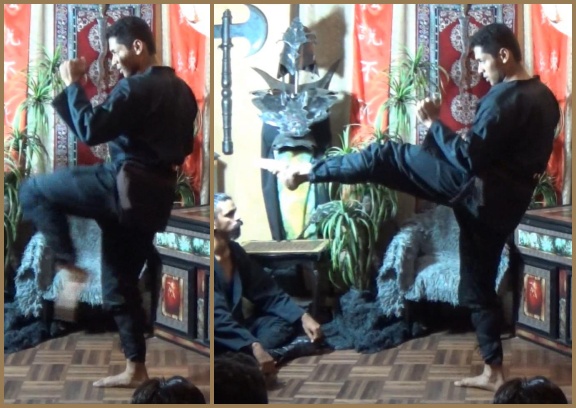 BEWARE OF THESE FACTORS WHEN USING THE KIN GERI

The first thing to remember when using the Kin Geri is that its use is too common among warriors. Do not use it unless an opponent’s guard is down. Alternatively, in the middle of a combat, one might use it suddenly if one finds that one has an opening, or if one finds that an opponent has made an error in his combat timing.

The second thing to remember when using a Kin Geri is that it is actually possible for a veteran fighter to take a Kin Geri to the groin and continue fighting. Of course, this also depends on the warrior delivering the Kin Geri. The most deadly warriors have been known to shatter an opponent’s pelvic bone with the Kin Geri, which is, of course, devastating. However, a beginner should not use this kick against a more experienced opponent – the veteran fighter might be able to take the beginner’s kick, even if it is a reasonably good one, and fight on without his combat ability being impaired. If one is forced into an unequal combat, the MAWASHI GERI (roundhouse kick) TO THE KNEE is a far better attack – it destroys a foe’s mobility, and makes it that much easier to destroy him.

...READINGS FROM THE SCROLLS...
What is the Highest Skill?

To win one’s battles
without the necessity
for combat;
That is the highest skill.

To master many
universes
without trying;
That is the highest skill.