...Deflecting the Enemy's Attack and moving to his Destruction...

Greetings, dedicated members of the Gyokku Ninja Clan. Here you will begin to learn the methods by which a ninja destroys his foes in combat.

Here you will learn how to deflect an enemy's attack and respond precisely and efficiently, attacking precise points on the opponent's body to cause massive damage - the nerves, the blood vessels, the organs, weak points in the bones and joints.

This is the next stage of your combat training, before you move to weapons combat. 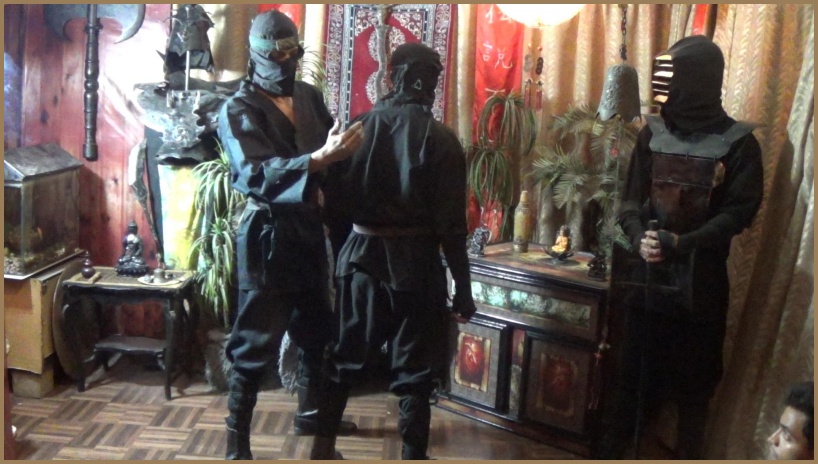 Hangeki techniques are used in close quarter combat when a ‘first strike’ has become impossible.

However, that is training for the future. At the intermediate level, before one begins to master weaponry, it is good to learn Hangeki. There is an introduction to Hangeki training in the video below, and after the video are links to many deadly Hangeki attacks and combinations that target different crucial areas on the opponent’s body.

Please be aware that virtually all Hangeki techniques are potentially lethal – that is to say, it is possible to kill with them. Be aware of this, and use them in a controlled manner, or only when you are in serious peril.

AN INTRODUCTION TO CORRECT HANGEKI TECHNIQUES AND TRAINING

Before you continue with your training, here is some crucial advice from a ninja master on how to train at Hangeki that you should listen to first, and apply in your future training. This video will tell you when to evade and when to deflect an enemy attack, and how to use Hangeki counter attacks in real-life combat.

Finally, you will be introduced to the two most common concealed weapons used by a ninja in combat. There is also crucial advice on using ninja techniques in general.

Now learn how to perfect your Hangeki with the ninja master in the video below...

Now go on, honored deshi, to learn the different Hangeki techniques at the links below...

THE CORRECT WAY TO STAND, GAZE AND MOVE IN COMBAT

HANGEKI ICHI, PART I - DAMAGING THE ORGANS OF BALANCE INSIDE THE HEAD

HANGEKI ICHI, PART II - COUNTER-ATTACKING WITH A STRIKE TO THE BALANCE ORGANS

HANGEKI COMBINATIONS - SAN, SHI AND GO (3 VIDEOS)
(Attacks to the Spinal Cord and Brain, and the Strike to the Bone Bowl)