"Master, does Batman, as shown in the movie 'Batman Begins', really use similar methods to the Gyokku Ninja to fight crime? He's shown training in a ninja dojo!"

Before I answer your question, I must first say that the popular attitude of, ‘the criminal is always wrong’ is repulsive to a wise master. The wise thinker knows that a criminal is sometimes a result of the terrible difference in society between the very rich and the very poor.

What is a thief, my student?

A thief is often a man who sees that others have much more than himself, and who considers this an injustice because he considers himself the equal of any man – so he tries to bridge that gap in the only way he can. Batman arriving and beating him to a pulp is hardly constructive. Now, that said, I will answer your question practically.

Batman, though he is depicted as being trained in a ninja dojo in the movies, actually does not use the tactics of a ninja in combat. Let me introduce you to a real ninja warrior, a man with at least forty confirmed kills in one of the most hostile combat environments in the world...

My father was Kawabata Noguchi, a brilliant jungle fighter who saw combat in the festering jungles of Myanmar and South East Asia – and who had at least forty confirmed kills in combat. One example of the sort of tactics his unit used would be to sharpen plenty of bamboo stakes and poison them with excreta or even dirt. These would be planted on either side of a jungle trail. Then they would hide and wait for an enemy patrol to use the trail. Just as the enemy patrol was alongside the spikes, they would fire some shots in the air. The enemy would, naturally enough, dive for cover… and kill themselves on the spikes. Those who didn’t die at once would inevitably die of horrific infections from the wounds inflicted in the hostile environment of the jungle.

This is the sort of tactic a ninja uses… death by environment!

There were hundreds of such tactics that the ninja ittohei employed against their enemies.

...FOR THOSE WHO WISH TO MASTER THE WAY OF THE GYOKKU NINJA...

Unlike in the movie 'Batman Begins' a real ‘batman-ninja’ would probably use a long range compound bow to take his opponents out individually and silently, rather than engaging them in melee combat. He would probably kill individual gang members, and plant evidence that another gang made the kill, to get the gangs to engage in a war in which they killed off each other. He would hunt gang members when they were isolated.

He would probably be a team

He would probably be a team of highly trained individuals who take turns being Batman, rather than a single man, allowing him time to heal from injuries taken in battle (the comic-book batman has no healing time at all). Time for healing is needed even in training - continuous real-life combat without the ability to heal injuries is just not possible. 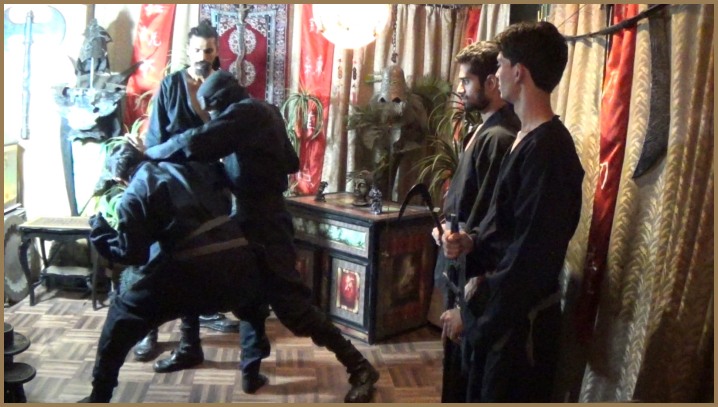 Also, being a team allows one to conceal losses – and there have to be casualties in combat. In real life, victory isn’t written into the script – it has to be won with pain and sweat, and only too often, with blood. No one is unkillable, no matter how highly trained they are.

Finally, a real-life Gyokku Ninja 'Batman' would not hesitate to kill.

Only by killing does one cause losses to the enemy… that are permanent.

And only permanent losses matter in war!!