What special methods of combat or secret weapons
are used in the course of Gyokku Ninja Training?

"Master, what methods of combat does a ninja use to engage his enemy - are there any special methods, or perhaps secret weapons that a ninja uses?"

For one thing, Gyokku Ninja hand-to-hand combat techniques focus on concealed weaponry to attack nerves and weak points in bones in close-in combat.

For mid range combat we use concealed armor and - again - a variety of concealed weaponry - for example, there is a bag that looks and functions like a bag, but whose design can actually stop a blow from a sword or mace.

The emphasis is on concealed weaponry in Gyokku Ninja training because this allows the warrior to fight with an advantage over his opponent, but does not allow the opponent to perceive that advantage or adapt to it. This simple precept is the foundation of combat victory. 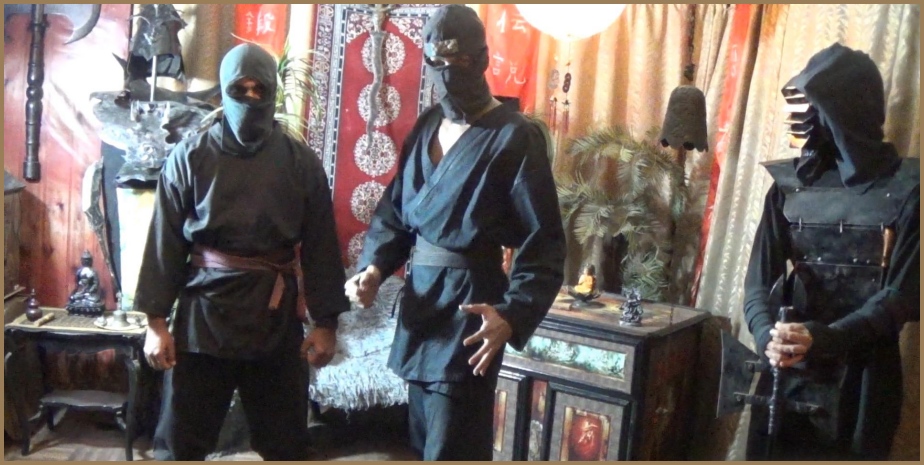 For combat at reasonably long range, we have a small steel bow about a foot and a half long, that can easily fit into the bag I mentioned before. This can deliver simple tranquilizers to whittle down the numbers of the enemy. It goes without saying that it can also deliver smoke or explosives as well.

Finally, I mentioned tranquilizers. We use such things in combat. We are perfectly capable of tranquilizing a powerful enemy even in hand-to-hand combat. The ninja, in combat, always take the easiest method of limiting and destroying his enemy. As you can see, the secret weapons training of the gyokku ninja involves concealed weaponry that ensures a psychological edge over one's foes, or long range and silent tactical weaponry that give him a stealth and range advantage.

Special training in methods of combat are focused on what will work most effectively, to down your enemy efficiently and to preserve yourself from harm.