BIO-CHEMICAL WEAPONRY OF THE NINJA

The Gyokku ninja rely upon various poisons that assist them in combat against powerful foes, or enable them to remove sentries in restricted areas silently. Certain plant extracts are also an aid in interrogations.

The ninja freely use poisons extracted from certain flowers that grow in the mountains. The extracts from these flowers, when highly diluted, have different useful effects. One poison used by the ninja can paralyze the body while leaving the mind unaffected; while another affects the mind to render a subject more susceptible to suggestion.

These purified ninja poisons are used primarily for stealth – either they facilitate silent entry into an area, or they leave the victim with no memory of the ninja’s passing.

One poison commonly used against sentries is an amnesiac that leaves the sentry functional, but extremely compliant to external commands. A ninja would use a dart to deliver the poison to the sentry, then simply pass in front of him, saying, 'I am a friend'. The effects of the poison induce the sentry to accept this, and allow the ninja to pass. Yet, he remains on his feet for all the time he is under the effects, so if a superior officer in his force calls in to check up on him, he will still be able to answer.

Even more advantageously, since the poison is an amnesiac, the sentry has no memory at all of the entire period during which he was under the effects of the poison. Thus, he is unable to provide information about the ninja when questioned later.

The method of delivery of a poison depends on the poison itself, though the Gyokku Ninja tend to favor poisons that can be delivered via an arrow, self-dissolving dart, or a thrown weapon. It is also important to point out that though the word ‘poison’ is used here to cover most of the ninja’s bio-chemical weapons, many of these poisons are actually non-lethal in their final forms, usually only paralyzing the foe or clouding his mind.

It goes without saying that more lethal poisons can also be formulated. The very flowers from which the subtle poisons are distilled, can, if simply ground up, provide killing poisons. However, these are rarely used unless actually necessary – the essence of a ninja is harmony, and a ninja, in passing, will seldom disturb more than is necessary for his passage. 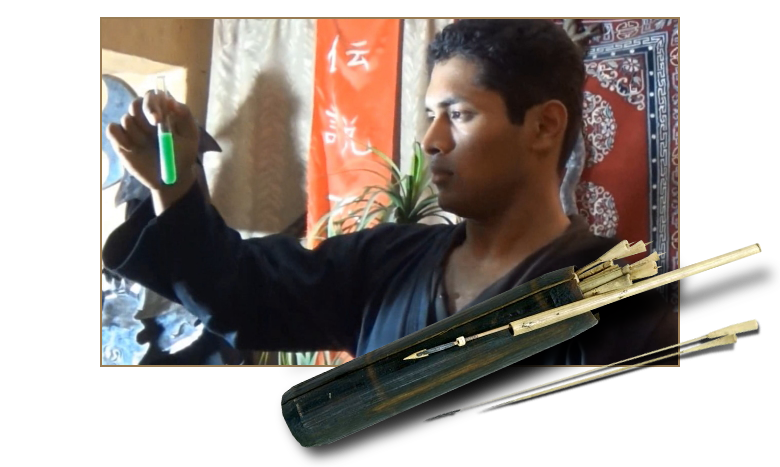 The Ninja also make use of methods of stealth, and advanced technologies such as electronics and explosives.
Read about these on the next page...

<< WEAPONS AND EQUIPMENT OF THE NINJA